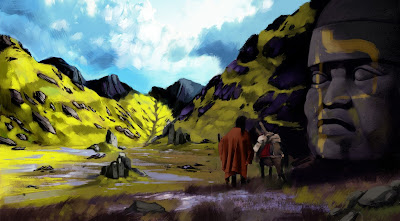 It's been a week and I haven't uploaded a single post! I do apologise but not a great deal, I was too busy enjoying the sun in Spain but I'm back now and I have a new painting for you guys. Even though I couldn't get my hands on Photoshop while on holiday (purely a desktop man you see) I did do a few sketches and thumbnails and the above image is the product of one of those.
I actually have ideas for about five more paintings, all of them chronicling the journey of this man, almost like a mini series of paintings. This first one is him taking his first steps on his journey, the great statue is marking the borders of his home country and he has no idea what lies beyond those hills. 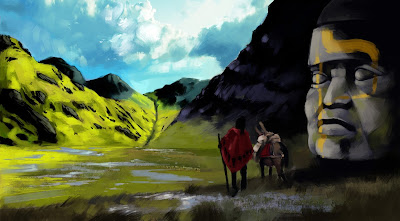 The top image is actually my second pass at the painting, the second one is were I was originally going to leave the piece. I hope you can agree that the top one pops a little more. I used predominately phot textures for the basis of this piece, which I think makes it look a little more "alive" than my previous environments, what do you guys think?? Till next time!