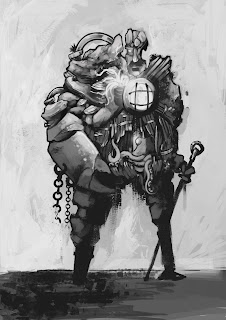 So it's only a few days until the deadline for the Cuberush golem competition, so I thought it was high time I started designing something for it! My initial steps were to make a bunch of simple silhouettes, to try and find a theme or basic look for my golem. I soon began to start playing around with a nautical theme, thus the chains, anchors and bits of ships jutting out from them. 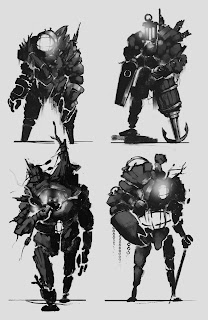 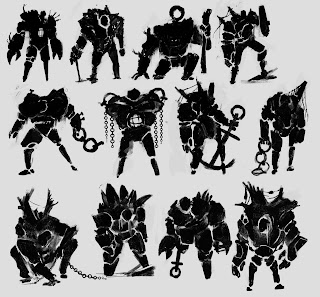 With a rough outline of what I wanted from this character I then did a second pass on a few of the silhouettes, exploring the nautical theme in a little more detail. His story began to develop a little more with these sketches, I didn't just imagine him as a simple golem but a bruiser for a pirate ship. The ships magician could've created him while they were out at sea, so all he had available to combine together was stuff from the ocean itself. Ominous, powerful but not particularly intelligent,  were themes I was trying to get across. 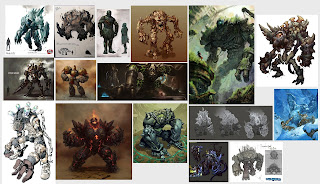 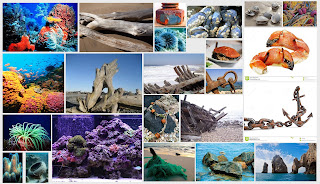 After that I picked my favourite out of those four and did a much more rendered pass at a design for the golem, making sure to have plenty of inspiration and references. He certainly evolved a lot from the loose sketch, replacing the metal banded rib cage with a buckling barrel. Looks like a little friend has also taken up residence in there! Huge pirates of the Caribbean influences going on here but I hope they still look their own thing. What do you guys think of my nautical golem? Do you think I'm going an interesting direction? Till next time!
Posted by Unknown at 11:05