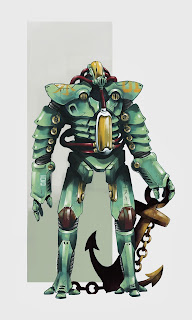 So here's the final product of those alchemy silhouettes I created a few weeks back. I ended up choosing the fifth design from the previous piece I showed you guys for the basic design of this guy. I did change a few things on the final concept, such as the feet, the arm plating and the shoulders. They were all pretty small changes but it made the overall design look a little more grounded. That was one of the main goals with this piece, to create something that looks like it could function in our world and had an actual purpose behind it.
I imagine this robot would be sent down into areas of the sea that are deemed too dangerous or too hazardous for humans. While it is in those areas it's tasked with collecting salvage and relics. It also has a secondary function in the form of the giant canister attached to the front of it. The idea would be that it can store trapped divers in there, supplying oxygen to them from it's helmet, while it takes them to safety.
I learned a heck of a lot from this piece, one being that I am not as scared of colures as I used to be and I'm getting more of an understanding of how shadows work. Still a lot more to learn though, so I will get back to it. Till next time!