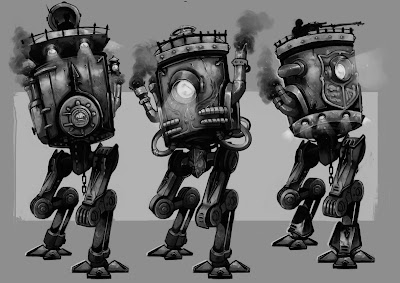 After some great feedback from the initial designs I did for my steampunk watchtowers I decided to do a much more detailed pass. The only criticism I got previously was that people wanted to see the watchtowers in a 3/4 view, so that was the first thing I went to remedy. I think you'll agree that they look much better this way than previously!
Design wise I stuck to the initial design of #1 from the last image, mainly due to it being a favourite among every body on twitter. Obviously I couldn't help and make some variations, always remember, re iterate, re iterate and re iterate. The main thing I want to push was the idea that these are functioning machines powered by steam, so I added a lot more chimneys and smoke stacks and also made them look very weathered, with soot stains, oil leaks and dints all over the metal. Finally I added some hints back to "the duke" the man responsible for building these, mainly in the form of the heraldry. I'm really beginning to form an idea of where I want this IP to go but you're going to have to wait a bit longer before I reveal it. Till next time!