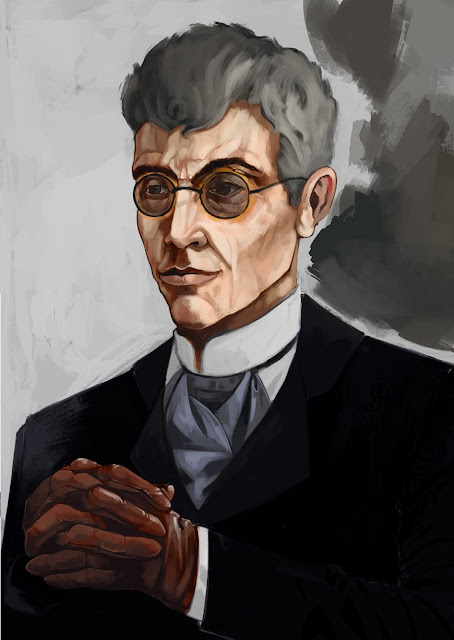 I'm back again at portraits but this one has more character design, he's based off a character from the book "Red Seas Under Red Skies". Here's what I based most of his look from....
"The statue like the man had prominent curving cheekbones that lent the narrow face a sense of mirth - plus a round protruding chin, wide eyes and large ears that seemed to have been jammed into the head at right angles. Requin, whose features bore a fair resemblance to a marionette put together in a haste by a somewhat irate puppeteer.
Bristling curls of steel-grey hair atop his head receding more sharply. He wore optics that glowed a translucent orange, giving a demonic cast to the wide eyes behind them.
His narrow frock coat was crushed black velvet, and his hands were covered with brown leather gloves."
I think I have kept to the original description pretty while still putting in some of my own touches, the glasses is purely how I envisioned them, so may not look how the author intended them. I thought they would look like his eyes were burning, as if to stare into his eyes was to stare into the eyes of a demon. I must say though I am struggling to render the crushed black velvet coat, it's such a weird material! 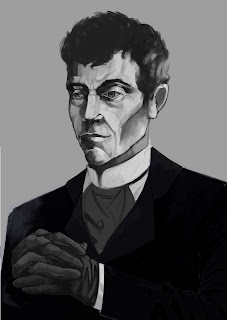 I've put the greyscale version in here too, so you can see how much I render out an illustration before moving over too colour. Greyscale for me has become more of a way to make sure everything reads correctly and looks like it should in real life, I find that when I jump straight into colour things can become very muddy quickly. It's something I need to work on. Till next time!