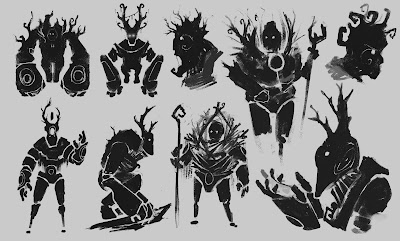 Big bumper update for you guys today! I have been playing a lot of Hearthstone lately and even gotten back into World Of Warcraft, I know, shame on me. However these games have inspired me to create an illustration that you could possibly see in one of those games. My first stop, as is becoming common with me, was to just doodle out a few ideas in silhouette form. 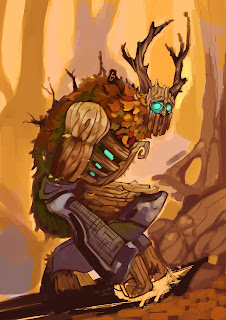 I quite liked the crouching guy so simply threw him on his own canvas and started rendering in some details and giving him more form on a greyscale layer. A simple gradient map and colour layer later and it was time to start rendering him in colour. His face was something I really wanted to push with this one, I generally paint grumpy looking evil guys, with a stern expression. I thought it would be more interesting to make him look a little innocent/scared. 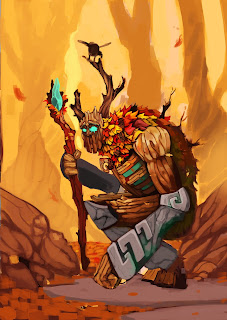 As you can see I came back to him a few days later and did a lot of re working, I thought his pose was a little stiff, so added the staff arm. The rocky parts also got reworked, to have a new design on them which hopefully looks a little more interesting, finally I did a lot of changes to the background to make it a little more readable and help draw the viewers eye to the character himself. There a still a few more things I want to add however, such as small animals scampering around him, to really reinforce him being a forest spirit.
I recently got some feedback on the most current version, so I am going to address those and hopefully finish him up this weekend. Till next time!
Posted by Unknown at 11:03